God often sends gifts in what seem like unlikely packages.

Jonathan and I have been going west in Virginia for weekend excursions for some years now. We went in that direction early in our time here because both of us had romantic visions of Shenandoah. What we found did not disappoint. There is so much beauty in the mountains and the valley.

We began by going to a gay-owned B&B outside Luray, and it was fun. The two men who own it are gracious, and the breakfast superb. The caverns aren’t bad either, if you like that sort of thing (I am less enthusiastic than Jonathan). 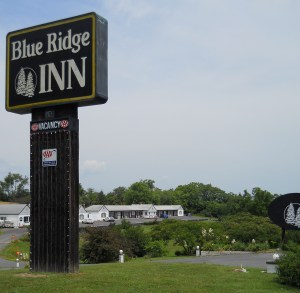 But when money got tighter, we found a less grand place to lay our heads, the Blue Ridge Inn in New Market. For about $50 a night, you get a cozy, clean room. Wendy, the English woman who owns the motel, is delightful.

Then, we found The Southern Kitchen, also in New Market. We have only eaten breakfast there–we are always going about during the rest of the day–but the biscuits are as good as my mama’s and the home fries satisfy even Jonathan’s discerning palate. This last trip, we discovered there is now a veggie burger on the menu, too! There also is a pretty good Mexican restaurant in New Market, and an excellent Italian restaurant in Edinburg, 20 miles to the north.

The reason our affection feels unlikely is that New Market and environs still carry considerable feeling about the civil war. There is a battlefield memorial as well as a privately-owned memorabilia shop, the local softball summer team is called the Rebels, and you can see some Confederate flags around. The next town north is Mount Jackson, and it may have been named for the former president when it was founded, but its hero is plainly the Confederate general. Neither town is especially beautiful, and both suffer from some economic slowdown. 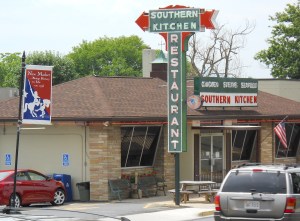 So–although we may find ourselves a bit out of step with the politics of the place– the people are simply good, the accommodations are excellent without being grand, the food is good and reasonably priced, and the scenery close by is refreshing and inspiring.

Richmond is home, but New Market is home away from home. Thank you, God, for guiding us there.

Robin is a poet (claiming this later in life) and Queer Theologian--reflecting a soul of hope and faith and joy and justice/shalom. He is happily married to Dr. Jonathan Lebolt (20 years and counting), the proud parent of three glorious daughters (and grateful to two wonderful sons-in- law and a new one soon!), and the very proud "Papa" to Juna (6) and Annie (3). View all posts by Robin Hawley Gorsline